This browser is not actively supported anymore. For the best passle experience, we strongly recommend you upgrade your browser.
All Posts Subscribe
January 17, 2023 | 1 minute read

Coral reefs make up less than 1% of the ocean but provide a home to 25% of all the world’s marine life, according to The Reef-World Foundation.

But, says the Natural History Museum, "the combination of multiple stresses of global changes in ocean temperature and acidification, with local pressures such as pollution, overfishing and declining water quality, has led to changes that could become irreversible within the next few decades".

Archireef, a Hong Kong based start-up, was recently featured in a CBS News article highlighting its innovative use of 3D printing to create terracotta reef tiles. These intricately-patterned tiles, once seeded with corals or other marine life and set on the ocean floor, are four times more effective in keeping corals alive than conventional reef restoration methods.

The Archireef website explains that the tiles - which were designed and invented by the University of Hong Kong - "were fabricated utilizing a six-axis industrial robot with a 3D clay-extruder attached that is based on a DIW method (direct ink writing). The project developed a unique fabrication method that balanced the tile’s algorithmic design with the clay 3d printing strategy and the drying and firing procedures to minimize cracking and deformation". Using an algorithm and the flexibility of 3D printing, the tile's design (shown above) can be adapted for different environments and for different ecosystems, such as mangrove swamps. These ecosystems, once restored, provide vital "blue carbon" storage, helping to address climate change.

In an interview with 3dnatives.com, Virko Yu, co-founder and CEO of Archireef, explained that 3D printing was selected for the project because it offers the ability to quickly adapt the tile's design. Additionally, 3D printing provides higher resolution, ideal for creating small but complex structures for marine organisms.

Terracotta has been used for thousands of years to create sculptures, pots, roof tiles and bricks. The combination of this ancient material with the latest 3D printing technology is a fantastic example of how innovators are coming up with new ways to save and reinvigorate our ocean ecosystems.

The tiles could have global application for coral adaptation, with benefits to humanity as well as ocean life. Reefs protect homes and businesses, breaking up destructive waves from storms. More than 1 billion people depend on coral, which plays an essential role in fisheries, tourism and even medicine. 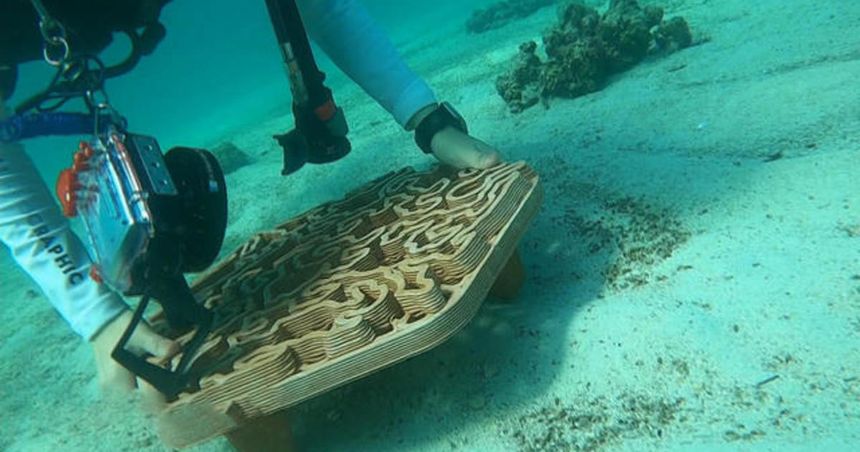