This browser is not actively supported anymore. For the best passle experience, we strongly recommend you upgrade your browser.
All Posts Subscribe
December 6, 2022 | 1 minute read

Catching the wave - a snapshot of WEC design

Like most patent attorneys, I do love a good infographic - and for me, they don't get much better than this wave energy market map by Deanna Zhang, creator of EtechMonkey.

"Though there have been hundreds of WEC designs proposed in the last few decades ... only a small fraction of those are still being developed today" writes Deanna. Her research found 25 designs being actively commercialised in several different wave energy converter (WEC) categories:

Deanna's map serves to illustrate the huge range of current WEC designs, each of which takes advantage of wave motion to generate clean and reliable energy. Although each design has its own advantages, and may be suited to different water depths and wave speeds, we may well see some degree of standardisation in design in the coming years, at least for different ocean environments.

Whatever the design, it is very encouraging to see how innovation in the field of ocean energy, together with wind and solar, is moving us all closer to electricity that does not cost the earth.

The designs can be very different from one another, a factor of the many variables that you have to optimize for in wave energy (efficiency, resiliency, simplicity, maintenance costs, biofouling / corrosion risk, etc.). There are different angles targeted (against the wave, with the wave, pitch, roll, yaw, etc.), different depths operated, different mooring systems, and different turbines used. 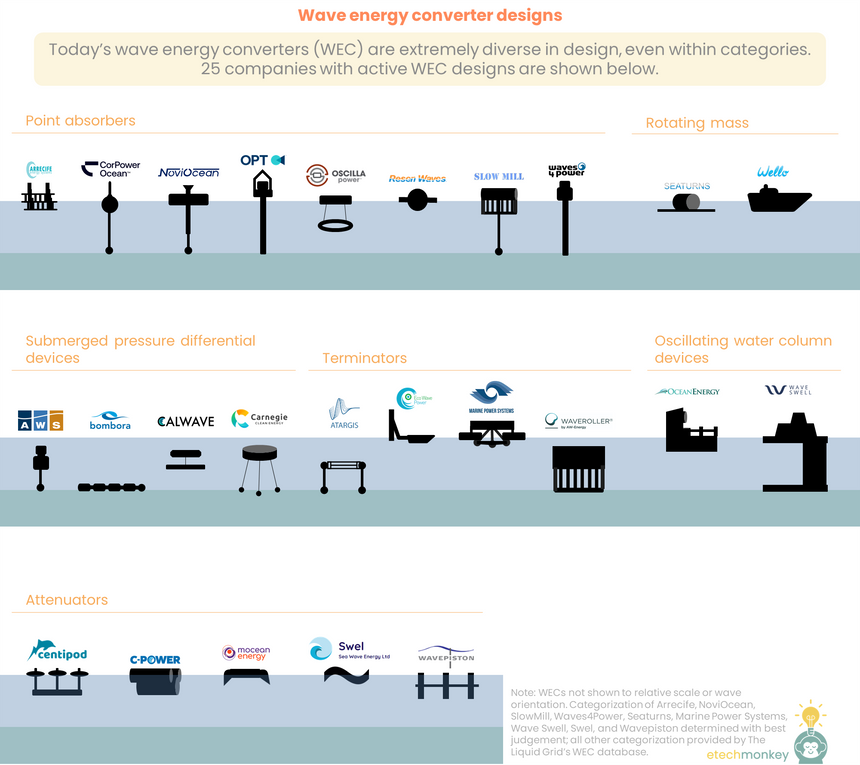