This browser is not actively supported anymore. For the best passle experience, we strongly recommend you upgrade your browser.
All Posts
July 21, 2022 | 2 minutes read

Renders of the new bridges scheduled to be dotted along the HS2 railway line through Buckinghamshire, Oxfordshire and West Northants have recently been published.

The appearance of the bridges along the HS2 is likely not something that many people outside of the project have thought about, but I am pleased to read that some serious design effort has been put into them. I note that "The bridges were designed by HS2’s main work contractor, EKFB − a team made up of Eiffage, Kier, Ferrovial Construction and BAM Nuttall – working with designers Arcadis Setec Cowi and architects Moxon."  They seem to have developed an aesthetically pleasing and functionally helpful design.

According to the article below, the bridges will feature "weathering steel" for aging naturally to a russet brown colour for matching the tone of the surrounding countryside. This may be a clever way of saying that the rust ("weathering") is an intentional part of the design, and given the internal oak, and how that would match to the rust, I suspect that it is. However, it will also help reduce the cost of the bridge as such steel is likely to be less costly, and easier to work with, than stainless steel, galvanised steel or aluminium.

The bridges will also have a recycled, non-slip, rubber deck that acts like a baffle to stop horses being distracted by passing trains. That sounds very sensible, and I am sure it will be a much appreciated feature of the design in the countryside.

Furthermore they will use oak and perforated stainless steel internals to be both attractive and functional, by offering views along the railway.

This all sounds to me like a very tasteful design, and from the render, it certainly look nice and modern yet sympathetic to the environment. It also reads to me like a list of potentially protectable design features.

Protecting major infrastructure projects with patents and designs is often an important step in the design process. For example, could the way in which the rubber deck acts like a baffle be protected with a patent, and are there other details of the bridge that have resolved technical difficulties?Likewise, the visual details of the bridge may lend themselves to registered design protection - be that for the bridge as a whole, or additionally some separate design registrations for the various details on the bridge, such as the oak components, the handrails or other distinct features of the bridge.

As the design will be repeated in multiple locations, having the product's design protected with patents and registered designs would allow the designers to ensure that they retain the right to construct all the bridges, rather than having features of the design "borrowed" later on by others elsewhere on the network!

HS2 has revealed the first images of the bridges that will carry rural footpaths and bridleways across the new high-speed railway as it passes through Buckinghamshire, Oxfordshire and West Northants. 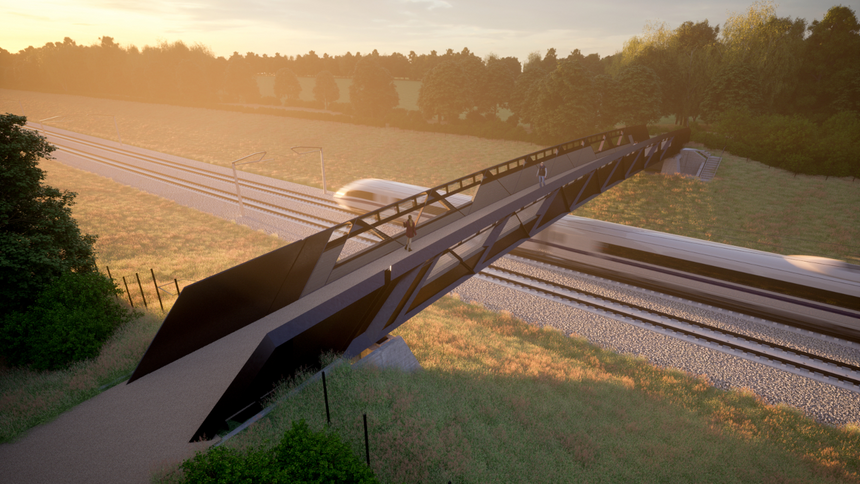 By Samuel Mailer
By James Kendrick
By Daniel Wolstenholme